The Power Of Generational Trauma

The Power Of Generational Trauma

My father never liked to discuss his background, his childhood, or his ancestors. I received bits and pieces of his story from others, including my mother, my mother’s mother who knew my dad when he was a boy, and his friends who shared stories after his death. It appears that there was physical abuse within the home where my dad and my aunt grew up. I am unsure of the extent of this abuse. My father shared only one story with me as he was teaching me how to drive. I have distinct memories of learning that my father had negotiated with my mother before having kids that he wanted to raise their children without spanking or corporal punishment. So, that is how I was raised. My father, with my mother’s support, turned around physical abuse in one generation. This is quite an accomplishment. I am always touched and full of gratitude when I remember this fact. That being said, my father stopped one behavior, but he did not resolve his own hurt feelings that he experienced as a child, adolescent, and maybe even a young adult. He didn’t know how to make sense of them. He didn’t know how to communicate about anger, frustration, hurt, and grief in a way that could be understood. He went silent and withdrew himself from those he may have felt anger or disappointment in.

Interestingly, my father’s unresolved traumas and his grief have been passed down to me and my brother. I have no doubt about this. I am sure that we are also the beneficiaries of unresolved grief from all of our ancestors.

We are under the belief that we only inherit physical attributes like hair color, eye color, height, and skin color. However, modern science is learning more and more about and research affirms that traumatic experience is passed on to future generations. This is known as emotional inheritance. I introduce this concept, which I am new to myself, so that we all have a foundation for this blog post.

I am continuing to share the voices of people of color because I feel it is imperative in order for all of us to grow as individuals and as a community. 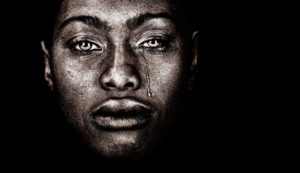 As a Marital Therapist, I say to couples, “When an issue comes knocking more than two times in your life, and it comes with a certain amount of intensity, it is because it has long tentacles that reach way back into the childhood (unconscious) agenda and it’s showing up today so that it can be acknowledged, dealt with and eventually healed. This is a process, not an event.“

These racially fueled killings and violence continue to come knocking in present-day life with such robust intensity because we haven’t dealt with racism at its root—individually or at the group level.

Social change requires us to dive below our old habit-songs, automatic knee-jerk responses, defenses—underneath the words themselves—to examine our conditioning. The interconnected framework of reality points us towards ultimate reality. Relational reality is the poignant elixir that makes ultimate reality possible—and we cannot know ultimate reality outside of our own bodily experiences.

We are made of habit, and our relationships are conditioned and formed by habit. As such, we need to understand how we have been conditioned to relate to each other before we can know real freedom and wisdom. It’s similar to the process of getting sober and healing from addiction. One must follow the tentacles that reach back into one’s history to understand the deeper underlying causes and conditions that led one to drink and use drugs addictively. This is how I know that with awareness, change is possible.

I’ll also say this: Black folks are genetically, intravenously afraid of the police—myself included. These days, I feel such deep angst for the Black men, women, and children in my family and for my own heart, which needs more than I can give it at times. The senseless and incessant suffering passed on has to be understood, dignified, and reorganized.

When harm of such magnitude is inflicted, and in many cases deliberately, it makes trauma more difficult to overcome psychologically—snowballing into a communicable social disease that affects all humanity’s well-being. We all have unforgettable markings of trauma, perennial wounding, and the grace of survival. 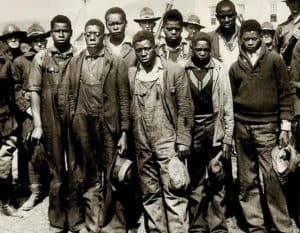 Let’s examine the most recent event, the killing of George Floyd by a policeman, Derek Chauvin. The police officer’s knee on the neck of Mr. Floyd is well-documented. Events that are also well-documented are the lynchings of Blacks, which were often festive family occasions for the white people performing the killing.

Stay with me here.

As I examined the photos of Derek Chauvin, I looked at his face. His knee in George Floyd’s neck. His sunglasses still securely on his head. Where were his hands for 8 minutes and 46 seconds? I make the assumption (because the behavior is so intense) that this type of behavior has long tentacles that reach back not only into Derek Chauvin’s history but also into American History. This isn’t new.

So, I examined some old photos of white folks gathering after lynching a Black man. I looked at and reflected on the faces of the white spectators watching the life being drained out of the Black man. Many of these men (and some women) are smiling, some even wearing their Sunday best—they look proud—pointing their fingers at the body hanging from the tree, with what appears to be a sense of accomplishment on their faces—all together standing around one, dead, unrecognizable face, of a Black body—hanging in front of them.

In both instances, I wondered…

Begin to inquire. What are you aware of? What is obvious?

We might also imagine what was in the minds and hearts of George Floyd’s family and other Black families (historically too, because the pain comes with such sharp intensity), as they helplessly witnessed such hateful acts, most likely from a distance, or who may have dreaded that such evil could happen when their son, daughter, father, or child didn’t return home at the end of the day.

A discerning heart recognizes that this reflection is not about blaming, denying, suppressing, or solving a problem as much as it is to open to what is revealed and shift our relationship away from a struggle toward healing and freedom.

I believe it is essential and life-giving to understand the blood-stained soil of U.S. history and recognize how white supremacy has systematically and intentionally resisted human equality in favor of power and greed and how this cultural swamp has impacted us all.

Begin to inquire. What are you aware of? What is obvious?

One only needs to think of what happened to Ahmaud Arbery, Breonna Taylor, George Floyd—to recognize that these traumas are not just a thing of the past.

What is unfinished in the past is transformed and re-authored in the present.

Old trauma, once a wound, is now a scar! Yet, when brushed against, the scar reminds us of what we must never forget.

During this time of tremendous anxiety, uncertainty, and angst, I want to encourage each and every one of you to support yourselves by providing the compassion and support that you personally are desiring at this time. I have concerns about people who are expressing that they are anxious all the time. However, I don’t hear or see a lot of people taking time out just for them to replenish and renew their energy. People in general, including myself, can make awful decisions when we are not centered and grounded. So, I encourage all of you to take some time each day to ground yourself. Also, if you find time to do a grounding activity twice a day, your body and soul will be forever grateful. Here is a simple activity that can be done anywhere at any time. This five-step exercise can be very helpful during periods of anxiety or panic by helping to ground you in the present when your mind is bouncing around between various anxious thoughts.

Before starting this exercise, pay attention to your breathing. Slow, deep, long breaths can help you maintain a sense of calm or help you return to a calmer state. Once you find your breath, go through the following steps to help ground yourself and bring yourself back to the present moment: 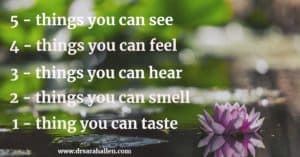 As I write this blogpost today, I am inspired by The Chicks, formerly known as The Dixie Chicks, a band I have always loved. Their harmony, lyrics, and music have always resonated with me. It became official today that they are dropping a portion of their name, as the use of “Dixie”—and its association with the Confederate states—has come under renewed scrutiny. Here is their new song titled “March March.”