Hello all! Sorry that I have been absent for a bit. As we all know, there has been a lot happening in the world and in our own personal lives as well. However, I really wanted to reach out to you and attempt to connect. As I pondered what I would write about this week, I had a thought—more like a feeling really—that I could not deny. My voice, while important, is not the voice we all need to hear right now. Now is a time for me to listen. I am a person who was born with white skin and all the privileges that come with that identity. I cannot possibly understand what it is like for a person to be born with black or brown skin. However, I can try. I can learn. I can do better! This is not dissimilar from me trying to understand any person who is different from me. Early in my career, I did my best to understand and empathize with people with varying disabilities so that I could provide the manner of support that they deemed worked best for them. This was how I learned that it is crucial in life to know when to lead. However, it is just as important, if not more important, to know when to follow.

Now is a time for all of us, including myself, to learn from people who have lived and still live with black or brown skin. Many of you know that I am a big supporter of Austin Channing Brown. I have signed up for her blog posts so that I can recognize, question, and unlearn much of what I have been taught as a white person. I feel called to learn, understand, and empathize with my fellow humans. Austin Channing Brown has been one of my teachers, and I am eternally grateful. Still, there are plenty of others who I am listening to as we are faced with these challenging and uncertain times. This is one of Brown’s recent blog posts that I resonated with deeply as she challenged me (the reader) to rethink my perspective.

Scroll through social media, and you will be sure to find a million photos of Martin Luther King Jr, dressed up, holding hands with other Black Americans in gorgeous black and white photos. Above or below, I’m sure you’ve seen captions that echo the sentiment: This is how protesting is done the correct way.

When I have posted support of the rebellion, I’ve personally received plenty of challenges like, “What would MLK do?”

Both types of posts serve to imply that there are easy answers to this present moment in history.

But I want to encourage us to Trouble The Narrative. It’s time for you to move beyond simplistic, convenient narratives and wrestle with complexity and nuance.

It is, quite frankly, lazy to accept child-like answers to questions like “what would King say?” Or “what would Jesus do?” Or “but isn’t violence always wrong?” Or “does the gospel have anything to do with race?” Or “but aren’t we all just human?” Or “but why can’t they just xyz?”

Martin Luther King Jr was human- growing, learning constantly. And since MLK was assassinated we have no idea what he would think about the fact that cops are still killing Black civilians in 2020. Trouble the narrative.

Jesus held a one man riot over capitalism in the temple, but you think he’d be calm about George Floyd? Trouble the narrative.

History. Scripture. Social Revolutions. Black Struggle. None of these can be boiled down into one convenient sentence. It’s condescending, lazy, and uneducated. It’s thoughtless. And thoughtless isn’t what we need right now.

Trouble the narratives of white supremacy and anti-blackness. Or else we will keep repeating this cycle.

*and yes. I am definitely thinking trouble the narrative is going to be my next tattoo.*

We are all in a time of tremendous turmoil, but it is also a tremendous opportunity. It is an opportunity to make a choice. Do we want to continue being unaware and to behave in ways that might be well intentioned but are not truly supportive of our friends, neighbors, and fellow citizens who are black and brown? Or do we want to use this turbulent time to educate ourselves in a way our schools and media never have? Do we want to go straight to the source and learn from people who are living this chaos and hatred every single day? As I chose many years ago as I supported people with disabilities, I am going to choose again to go straight to the source. I want to hear and learn from people who are different from me. After all, I truly believe that I will learn more from people who have had different life experiences than I will from people who have lived lives very similar to mine. This is how empathy is created. 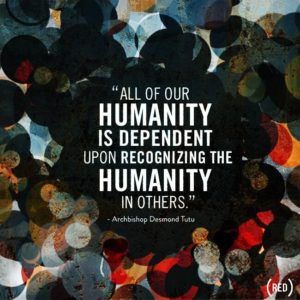 Here is an incomplete, but nice list of resources to dig in and educate yourself. This document is intended to serve as a resource for white people and parents to deepen our anti-racism work.

I think that wherever I look these days I can find inspiration. It has been uplifting to see the mass number of people protesting the police brutality and using their voices to demand justice.  As they say, enough is enough! The diversity of people who have shown up all over the world to stand with people of color has been heartwarming. The diverse makeup of these folks, who have shown up to stand and speak up for George Floyd, Ahmaud Arbery, Breonna Taylor, and so many others is something that the world has never seen on this scale. This is new. This gives me hope. It’s the coming together of people united that makes all the difference. 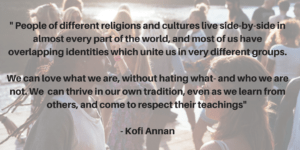