Dare Greatly In Your Conversations

I love nothing more than a deep, heartfelt conversation with another human being, the kind of conversation where the giving and receiving flow freely in both directions. I love those conversations when people show up exactly as they are, when people are sharing not despite their vulnerabilities and foibles, but because of them.

The people who enter into these beautiful conversations are daring greatly. It takes tremendous courage to speak your truth and share it with someone else. It takes guts to intentionally walk into the arena and lay your heart bare before another, not knowing what the response will be. You could be judged. You could be criticized. The other person could have a difficult time hearing your message and therefore not know how to respond.

I stewed on this frustration and hurt for years, and I would always tuck it away for safekeeping. Recently, though, I opted to come clean. I was tired of holding this back. I was tired of feeling a bit closed off from my friend by not sharing my perspective. So, I dove into this conversation gently. She listened intently. We agreed that the timing was not great to take a deep dive into this conversation. However, we agreed to revisit it when we were not distracted and we could be completely present for one another.

I am pleased to say that we did resume this conversation. We actually employed some of the techniques from Imago dialogue that I have written about to be sure that we were clear on each other’s message. This conversation was so very healing and affirming of the depth of our relationship. We took turns sharing and listening. We both owned our roles in the situation. We cried and we expressed a desire to do and be better in our relationship. What more could I ask for? Honestly, stating my truth and speaking from my heart was much of what I desired.

That being said, her intentional listening, reflection and clarification of my message, and validation allowed the conversation to be as healing as it was. Additionally, I was able to offer the same to her as she shared her truth, perspective, and emotions around the matter. I think the blessing of daring greatly in relationships is creating the gift of a deeper, richer, and more open and honest relationship than the one that existed prior to the conversation. I am forever grateful for the people who are willing to dare greatly and enter into these intentional conversations with me.

I have also recently had the opportunity to reconnect with a friend I have known for fifteen years. He was always one of those friends who appeared to have his guard up. He didn’t appear to let anyone in too deeply. I was the nudge in his life who continually attempted to pry or maneuver myself in, which he tolerated with a smile. Over time, distance grew between us, simply because we did not nurture our relationship. From my perspective, it was so difficult to connect deeply with this friend after so long that I wondered if we were connected at all.

He surprised me when he reached out and shared what had been going on in his life. Over Facebook, I could be the intentional listener to his messages. However, we agreed that this conversation would be better served by one-on-one time together. We agreed to meet when he was passing through town for the holidays. We had a wonderful, truth-telling dinner where the gates had opened for both of us. He shared his struggles and all that he has been going through. I, in turn, listened with curiosity and no judgment. I also chose to share experiences from my life. He returned the gift of active listening. We were both completely present with each other and the situation. What a gift!

I am truly grateful at the end of one year and the beginning of another that I have two friendships in my life that just became deeper, richer, and more meaningful than they had been previously. I am grateful that my friends and I did not take each other or the moments together for granted. I am so deeply grateful that we all made cognizant decisions to dare greatly and nurture our friendships and love.

Kim and I have just discovered a new TV show that we love. It’s titled The Kominsky Method. This Netflix show stars Michael Douglas and Alan Arkin. I don’t believe I have seen on screen many deep, longstanding, loving relationships between men. However, The Kominsky Method offers this. It simply feels real and so authentic. It reminds me of my dad and his friends!

Another good find in the same vein is the movie Green Book, starring Viggo Mortensen and Mahershala Ali. What an amazing true story about an unlikely friendship that lasted a lifetime. Just beautiful, tender, and full of laughs.

I can’t think about my experiences of entering into messy conversations without thinking about all I have learned from Brené Brown, researcher and storyteller. Brown has been such an inspiration in my life. Here is a video where she talks about the importance of telling our stories. “Story is love!”

STORY IS LOVE – What does courage made flesh look like? Brené Brown says courage is telling the story of who you are with your whole heart. "When you deny a story, it defines you. When you own a story, you get to write the ending." 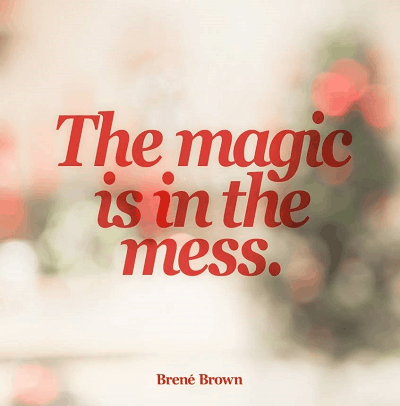 Dive straight into the feedback!Login below and you can start commenting using your own user instantly